The Drivery – Now also in China!

Starting the year strong, we have some pretty awesome news to share today.

As you all know, The Drivery has established itself as the largest marketplace for mobility innovation in Europe. The concept has worked out exceptionally well for us; we’ve fostered startups connected them to investors. Since the inauguration, 4.5 billion EUR has been invested into The Drivery Members. We have also gotten great feedback from the public sector, remarking on their gratitude for our input and inspiration.

The thought of elevating the concept and the ecosystem to a global level has always been there from the very start. The question was only: Where do we go next?

We had two solid options in mind: the U.S. and Asia. Both ecosystems are fast-paced, vital in mobility innovation, and are places in the world where we have a solid network already.

But then the pandemic hit, and we saw how differently both ecosystems reacted to it. On the one hand, you noticed how China bounced back quickly and has grown at a record pace in 2021. But, on the other hand, you had the U.S., where many of our contacts suddenly went silent, many operations stopped, and political unrest was growing.

That was the moment when it became crystal clear to us: China is, with their rapid developments in the field of Urban Mobility, Public Transportation, AI, Electrification, Mobility and Data.

To profit from these technologies in Europe, we have to expand our network and our concept to Asia, starting in Shanghai, which we chose for two reasons:

1. It is a traditionally powerful automotive city, so naturally, the mobility sector has also established itself firmly there. New technologies are being developed very quickly, and bureaucracy is straightforward.

2. The second reason is that our founder, Timon, has lived in Shanghai himself and saw first-hand how strong the city is when it comes to Urban Mobility – take a look at how quickly they plan to expand their metro network from four lines to 25 by 2025. That means every central location of Shanghai will be within 600m of a subway station!

The current state of The Drivery China

The Drivery in China is not as large as the one here in Berlin yet, but we have the elements of coworking, a workshop area and event areas covered on four levels – and plenty of room to grow. And grow, we must! We’re already completely booked out for February 2022.

The companies that are currently based out of The Drivery in China are impressive. From startups over corporates to investors, there is a lot we can learn from our Chinese counterparts.

We’ve observed a significant difference between the startups there and the startups here, for example, their outstanding focus on Tech and Deep Tech, whereas a lot of focus for German founders is on the business idea.

Also, since there is a lot of free capital in that part of the world, most startups are quite well-funded.

If you’re reading this right now and would like to be connected to our local Drivery members in Shanghai, please reach out to us, and we’ll make the introduction!

We have highly ambitious plans for 2022. The U.S. is not off the table. In act, we’re already planning quite hands-on where to set up base and what our focus areas will be there. At the same time, with our foot in the door in Asia, we’re also looking at Korea and Japan, where we’ve already started smaller projects like the Accelerator Programme.

In the meantime, we will organise delegation trips between China and Europe once more, as soon as possible. We will also open up investment opportunities in China for German investors and vice versa. As always with The Drivery, we’re not a coworking space but a strategic partner that makes the right connections within our network. Our members know that and see us as a gateway to new markets – be it China, Europe or USA. 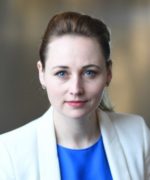